This past week has been one full of movies and television shows. I think I have stared at my TV screen for as many hours as I’ve spent with my face planted in a pillow fitfully sleeping. I don’t often watch this much but being sick and various cold medicines coursing through my veins has limited my capacity to think or focus; reading actively hurts my brain. There’s something deeply unsettling not having the wherewithal to think coherently.

I feel like I haven’t been part of this world these past five days. Immersing myself in Grace and Frankie or the second season of The Expanse has allowed me to completely let go of my normal responsibilities that life demands. Work has been relatively non-existent, save for the Tuesday rush to meet a deadline and a helping my DevOps guy work through a server issue last night. I haven’t left the house except for yesterday morning when I needed to replenish my broth stock and cough drops. I have primarily been confined to my double bed, wrapped in blankets with my pug napping alongside me.

The only thing of consequence I’ve done this week has been this here blog. To be honest, I can’t believe I’ve actually written every day. In the past, I would have used the sickness as an excuse to not write. I don’t know what the difference is this time around. Why am I sticking to my promise? Actually, not writing isn’t something I’ve even considered.

Back at the end of last year, I was perusing the /r/getdisciplined subreddit because I was unhappy where I was in my accomplishments outside of work. I stumbled upon a comment on I’m a piece of shit. No more games, No more lies, No more excuses. I need discipline. I need help. I read that comment, then read the post that the comment belonged to, then started looking up the forty-nine days to forming habits or breaking them. And that lead to one link after another and me looking up four hours later thinking, “Shit, I gotta feed the pug!” 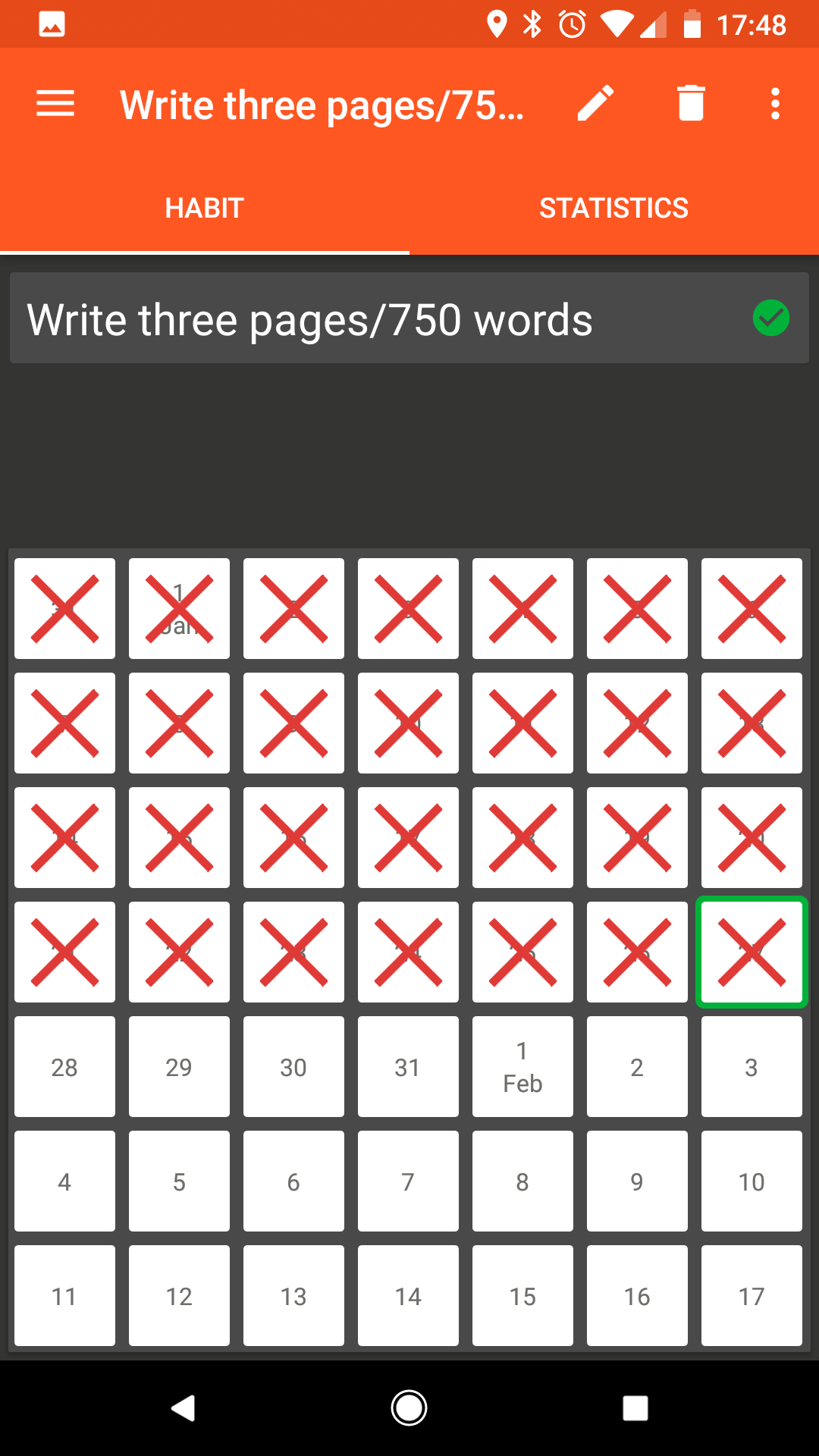 That was the day after Christmas. I downloaded 7 Weeks – Habit & Goal Tracker and put “No smoking” as my first goal. It’s now been thirty-three days since I’ve had a cigarette. On New Year’s Eve day, I made the audacious decision to write on a consistent basis. Morning pages, which is three pages of stream of consciousness writing, is roughly 750 words. I figured that was a good goal. It’s enough words where I would actually have to sit down and write something of substance each day but not so insurmountable that I wouldn’t allow myself to slip (trying to write twice that amount each day would be daunting, especially since I hadn’t created the habit yet). Today will be the twenty-eighth day of writing at least 750 words each day.

As I’ve said, writing isn’t the goal. The habit is the goal. Making the space to follow through on a commitment I made to myself is the important bit. Sure, most definitely I want to become a better writer. There have already been a few fictional blog posts that I wouldn’t have otherwise written. And, as a side effect of this consistent practice, writing ideas and stories have begun to flood my brain (I woke up this morning with a pretty nifty sci-fi story in my head, almost fully formed). Making writing a priority is what matters here. Being consistent, pushing through the discomfort, and just doing it…that’s the good shit.

I think a lot of us just allow our lives to happen. We fall into patterns. We get comfortable. Things are just moving along. Our lives may not be perfect but hey, it’s enough. This was what began to happen last year for me. I was promoted, I was making great money, I was spending all my time working. And I didn’t like it. I wasn’t creating anything with any real value (I’m sure that’s not what my clients or the owner of the business thought of my output).

I wasn’t doing anything for me. I became an automaton. I was a machine. That is no way to live your life, no matter the amount of money you make.

So, that’s where I was on New Year’s Eve. Thinking how I hadn’t done a thing for my own enjoyment, my own desire. Thinking that everything I did had to be measured in dollars earned or invoices generated. Writing was my first love as a child. And I needed to find the joy simply in the act of doing without worrying about the outcome. Just the act. Pure and simple happiness in putting words down.